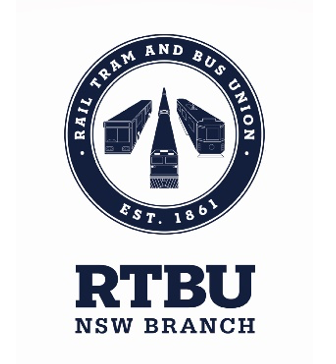 How did we get here?

An explainer for RTBU members

Why is the New Intercity Fleet Unsafe?

Find out why by downloading Here 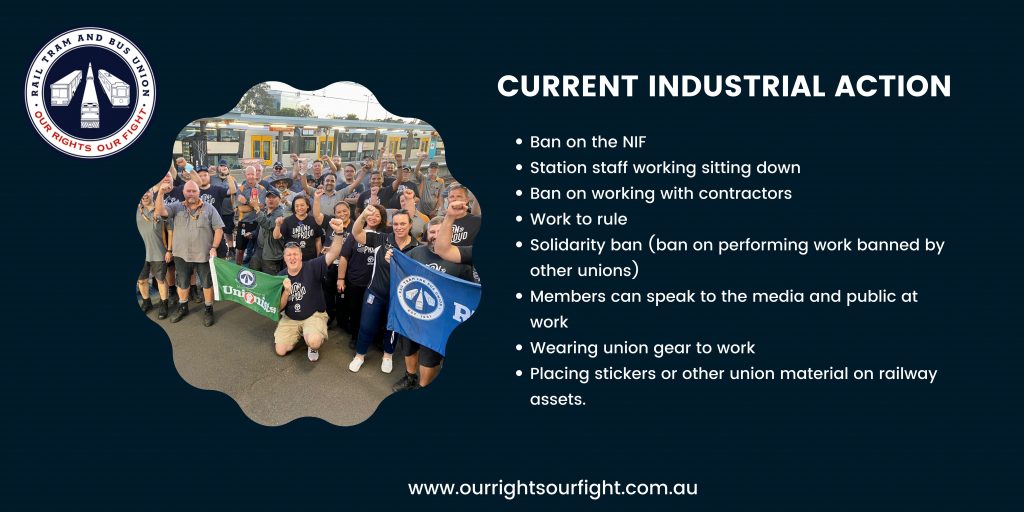 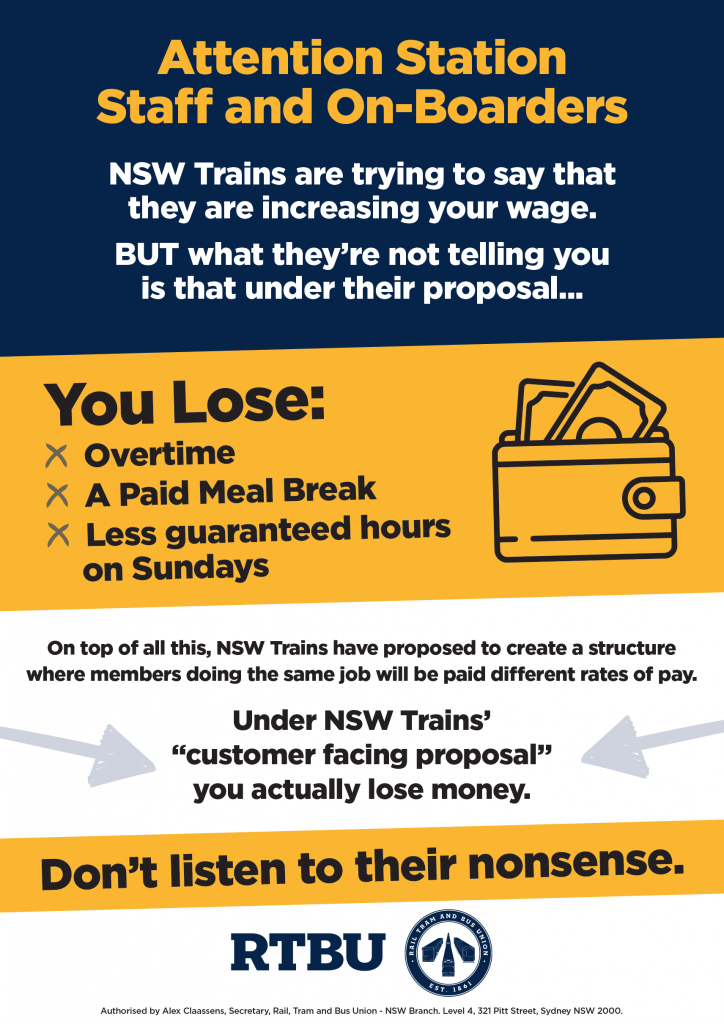 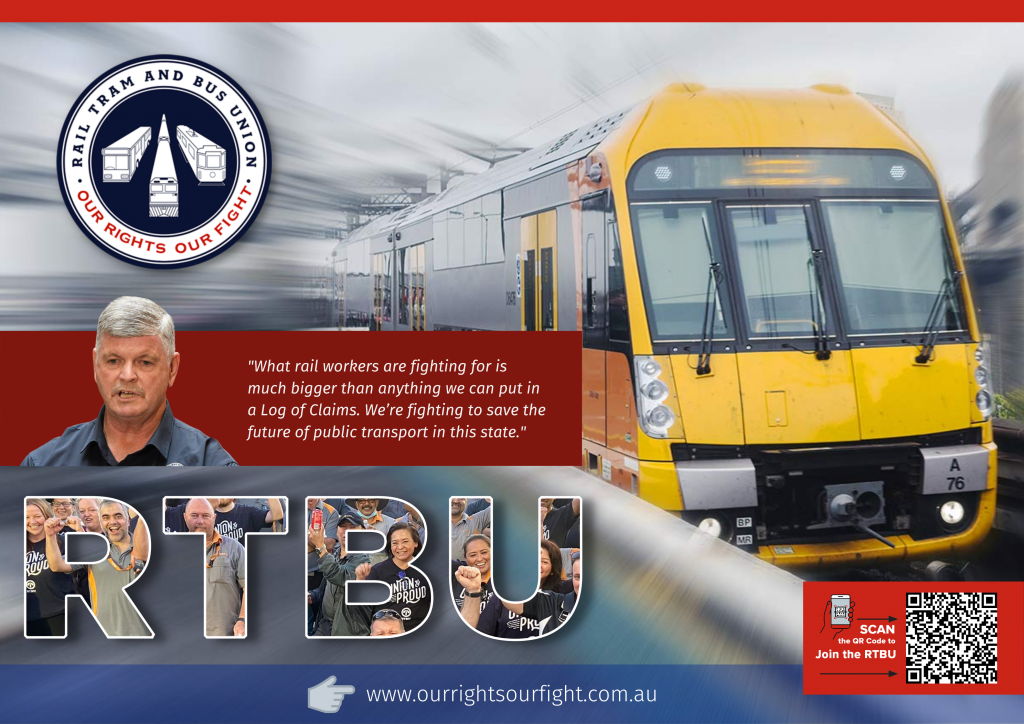 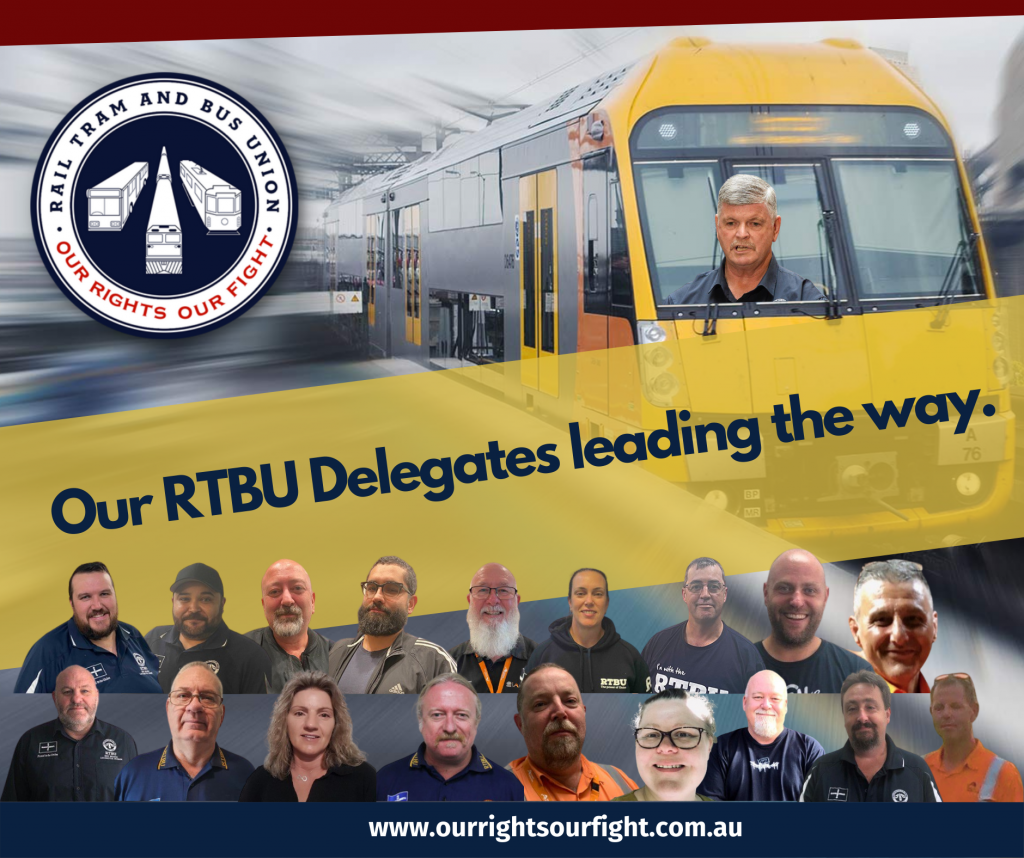 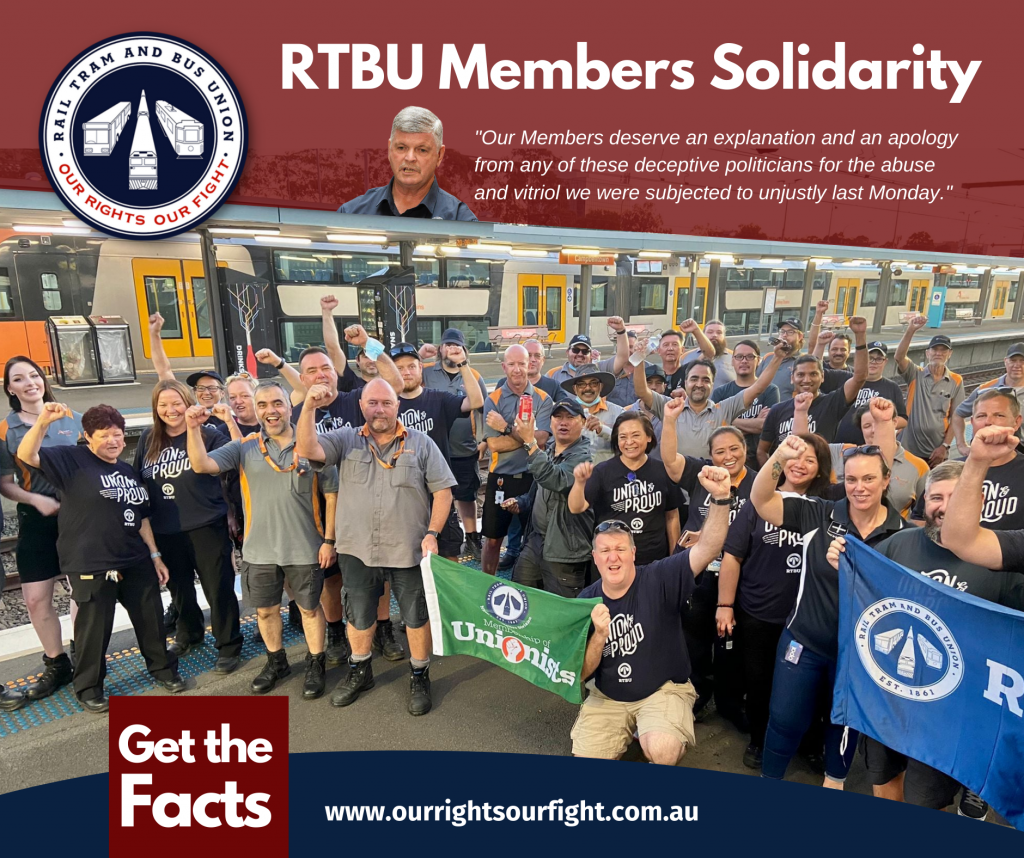 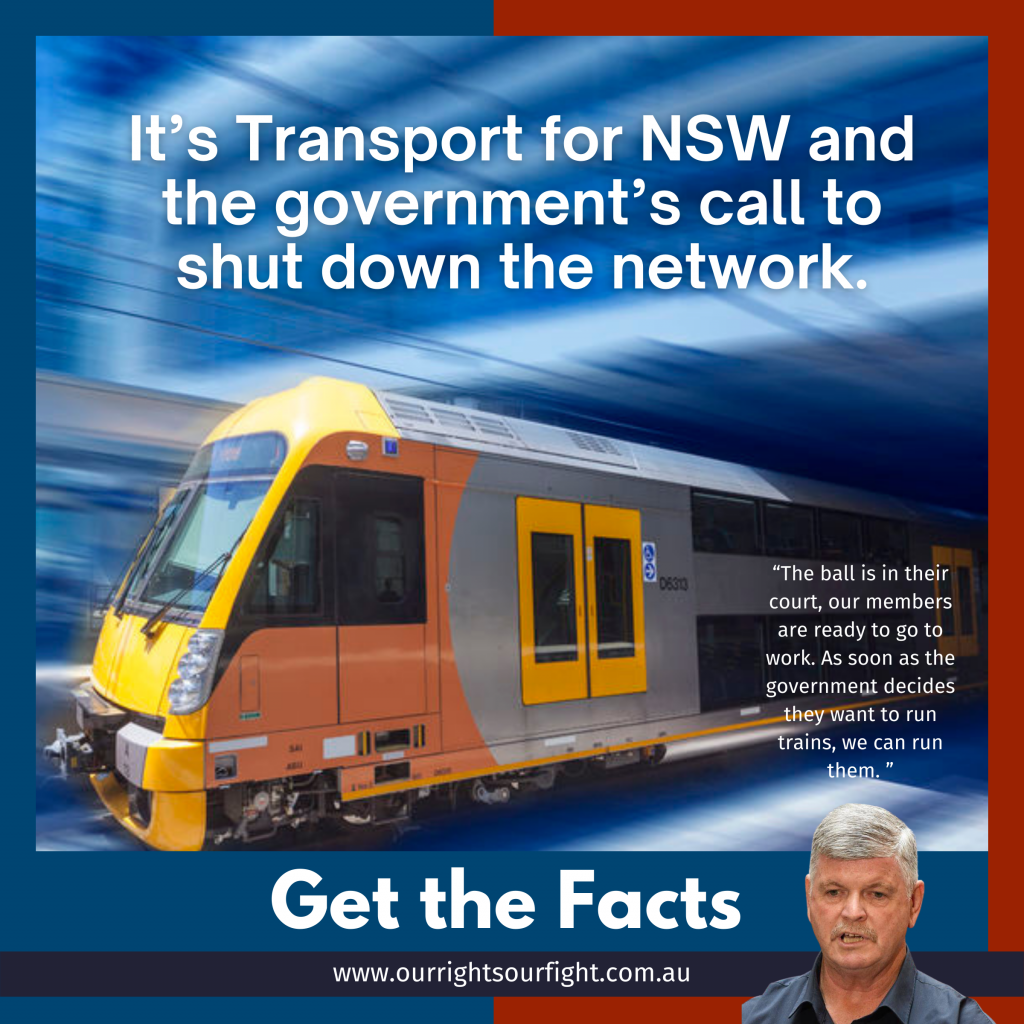 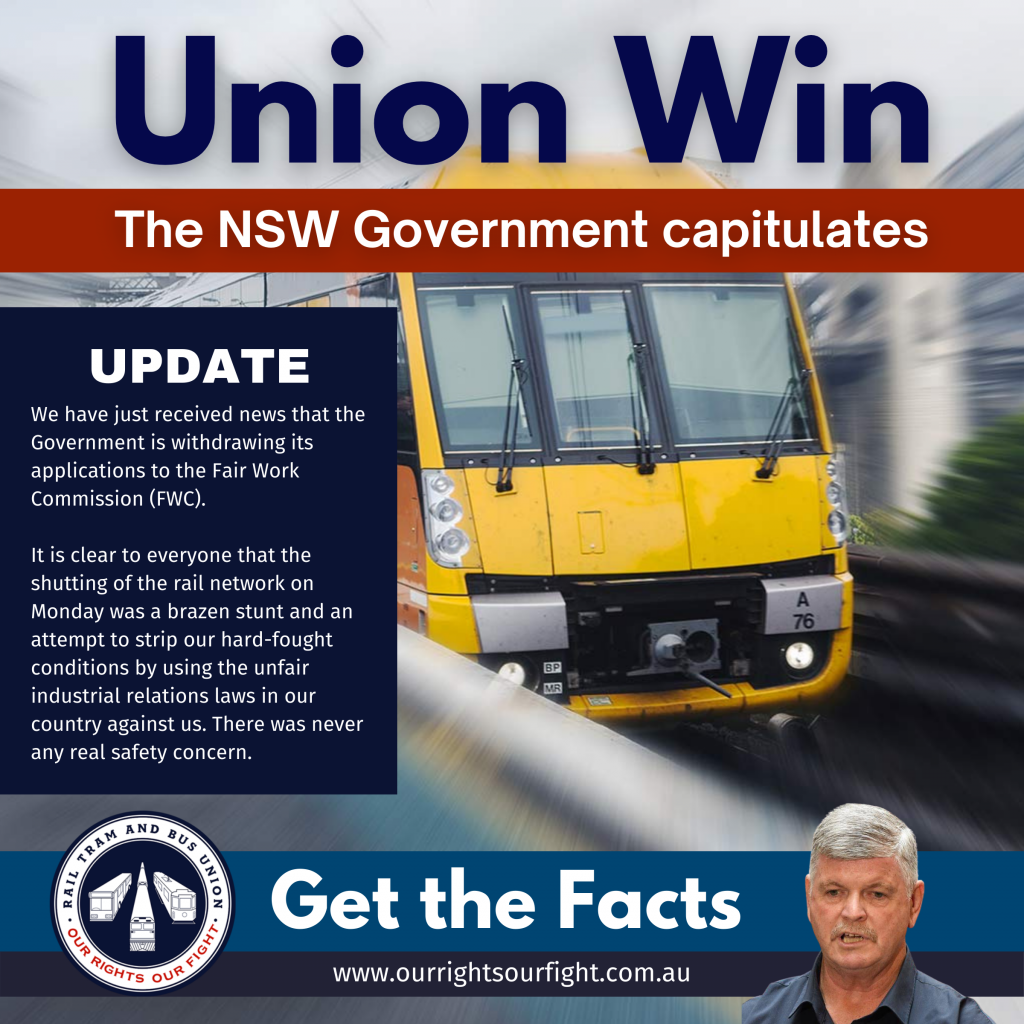 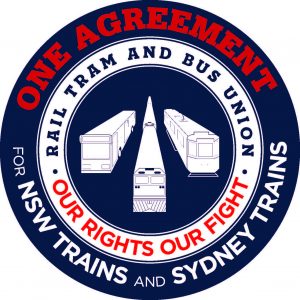 Script for Station Staff and Guards – No Fines or Cautions Day

As part of ongoing industrial action by the RTBU, today Transport Officer members will not be issuing any fines or cautions. This is to say thank you to the community that has supported our campaign in what has been a tough year for everyone.

Rail workers appreciate your support for our fight for a safer and publicly owned railway.

Your service today may be disrupted due to ongoing industrial action. During bargaining, Sydney Trains and NSW Trains have rejected key union claims to ensure that our network is safe for all passengers, including our claim to maintain COVID cleaning across the network.

Workers are also worried about our public railways being privatised. The NSW Government has already privatised the buses, ferries and the light rail, and we are fighting to make sure they can’t privatise our railways next.

Our claims are all about the safety of everyone using the rail network – remember today that if your train is full, stay COVID safe and wait for the next train.

Rail workers appreciate your support in our fight.

Materials for Speaking to the Public

As part of protected industrial action, members are able to communicate with the public about any aspect of the bargaining campaign.

On the 7th of December, our ban on privately-built rolling stock will cause significant disruption to the rail network. This is an opportunity to communicate with passengers about why we are taking action on an issue that is important to them as well as RTBU members – privatisation. Sydney and NSW Trains still haven’t committed to our anti-privatisation claims, and action will continue until they do.

Guards and Station staff should make announcements whenever possible throughout the day.

Teachers across NSW are also on strike on the 7th of December, and we want to show our solidarity to other union members facing their own ongoing battles with the NSW Government.

Your service today may be disrupted due to ongoing industrial action. During bargaining, Sydney and NSW Trains have refused to accept our anti-privatisation claims.

The NSW Government has already privatised the buses and the light rail, and as RTBU members we are fighting to make sure they can’t privatise our railways next.

RTBU members running this train/at this station also stand in solidarity with all members of the NSW Teachers Federation who are on strike today. 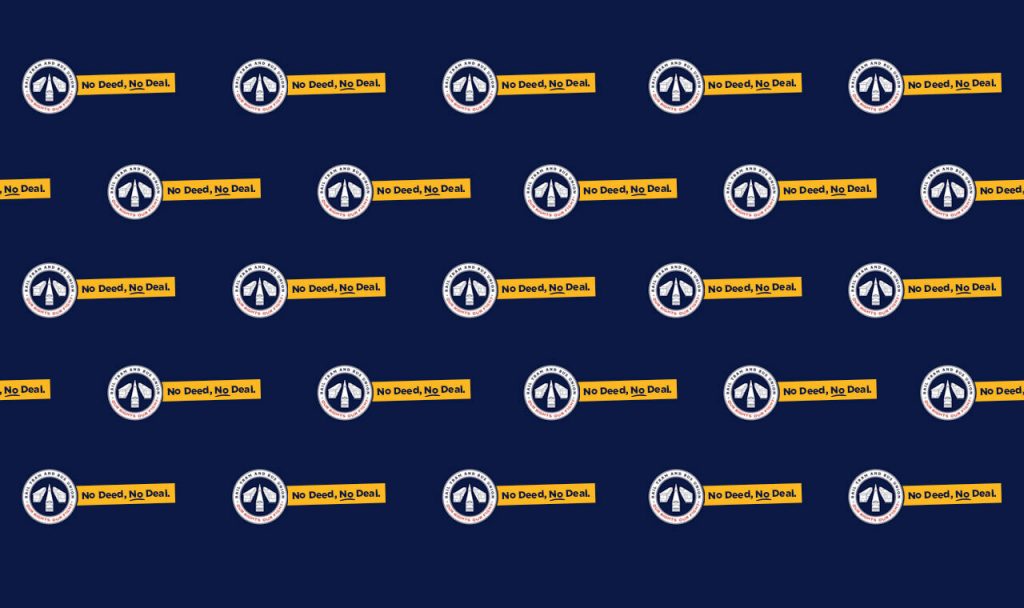 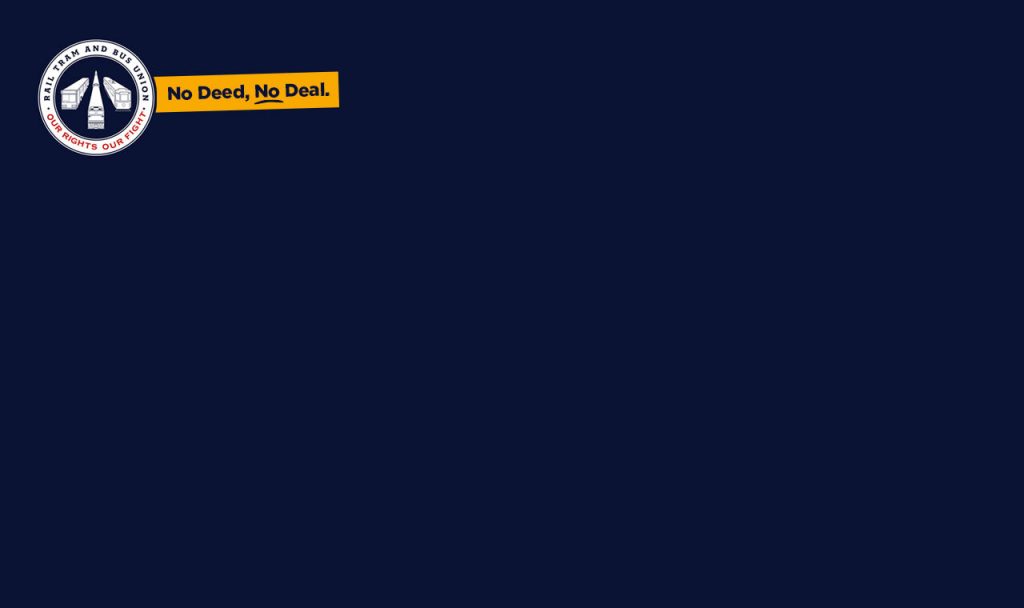 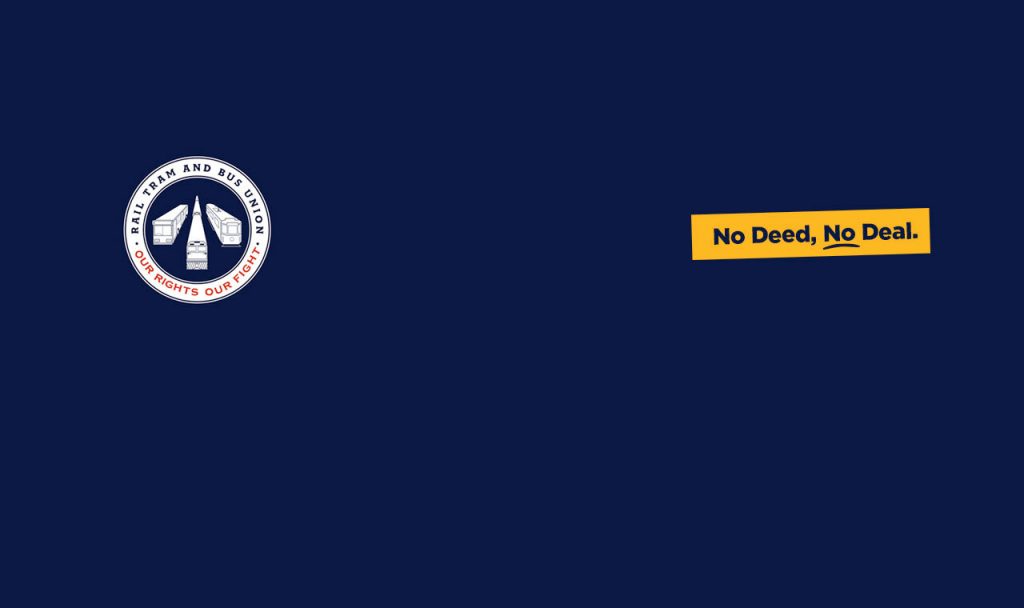 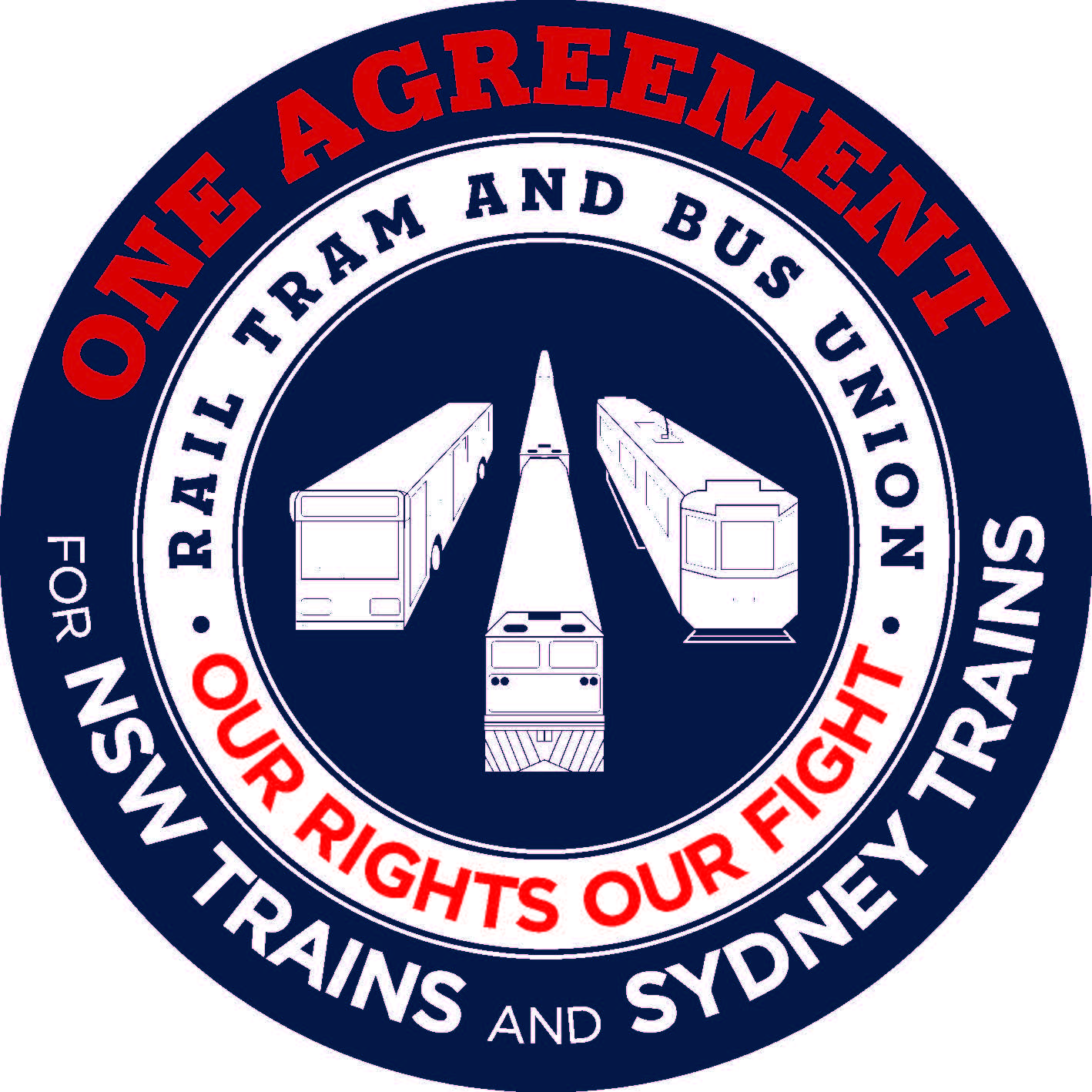 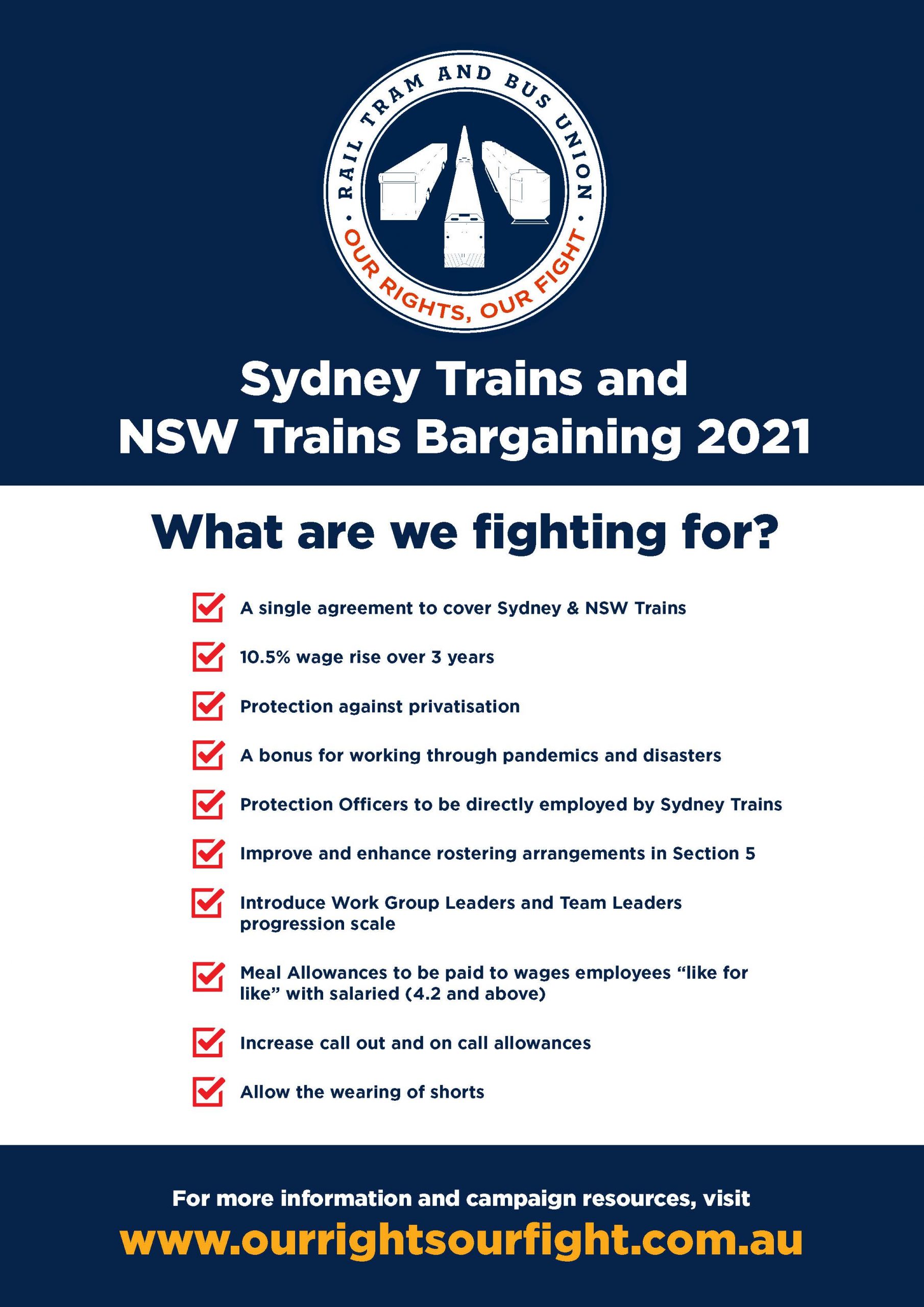 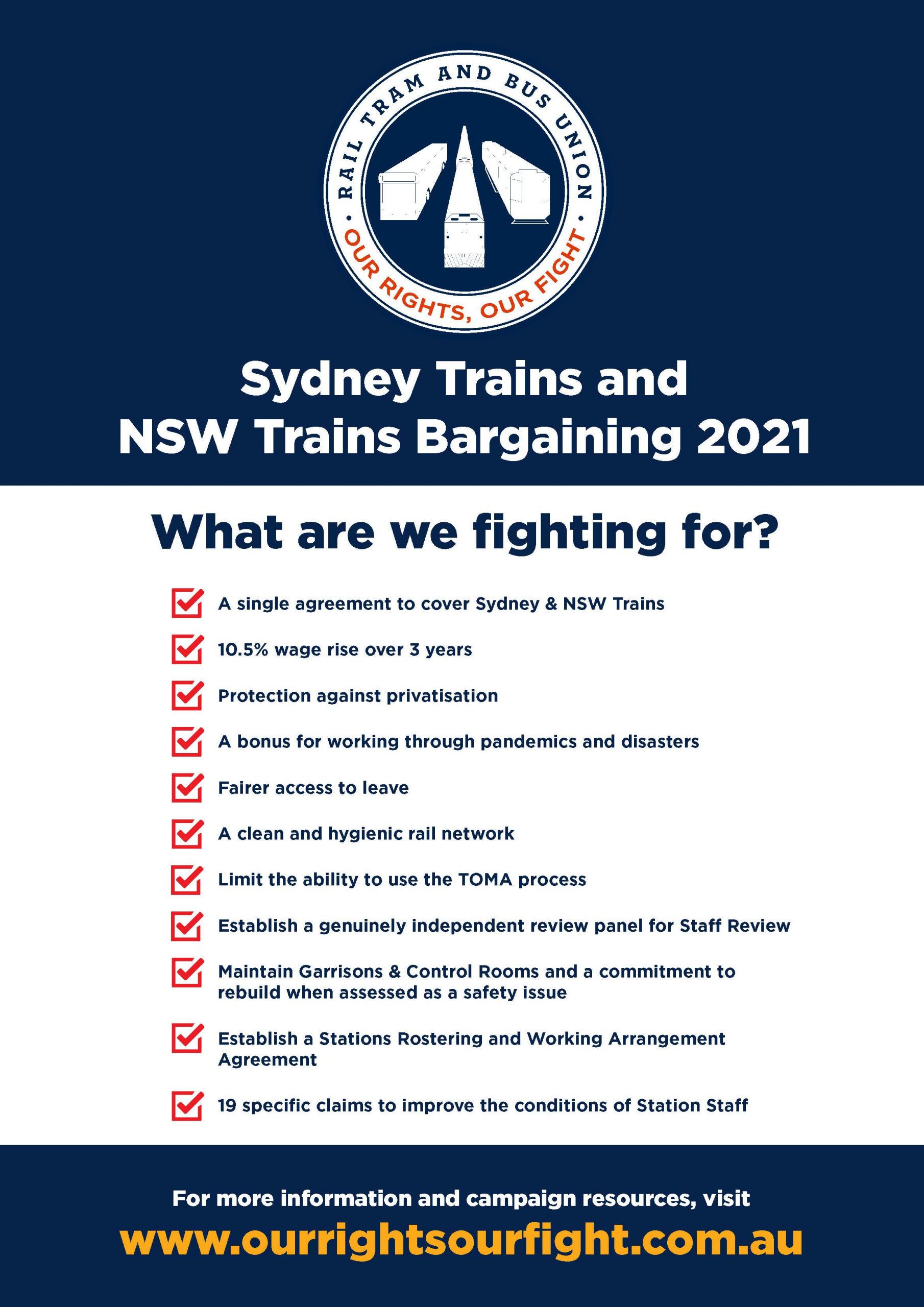 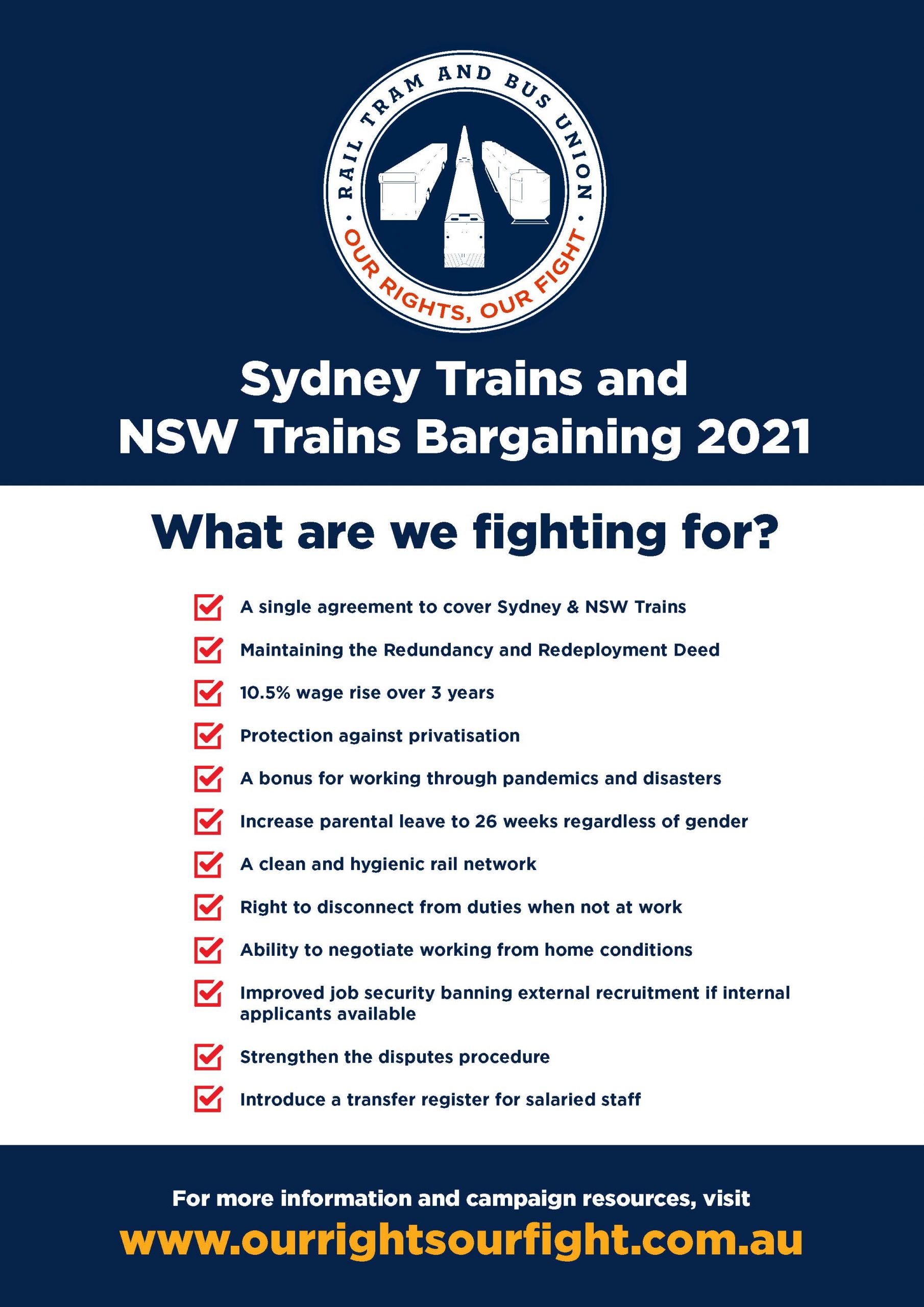 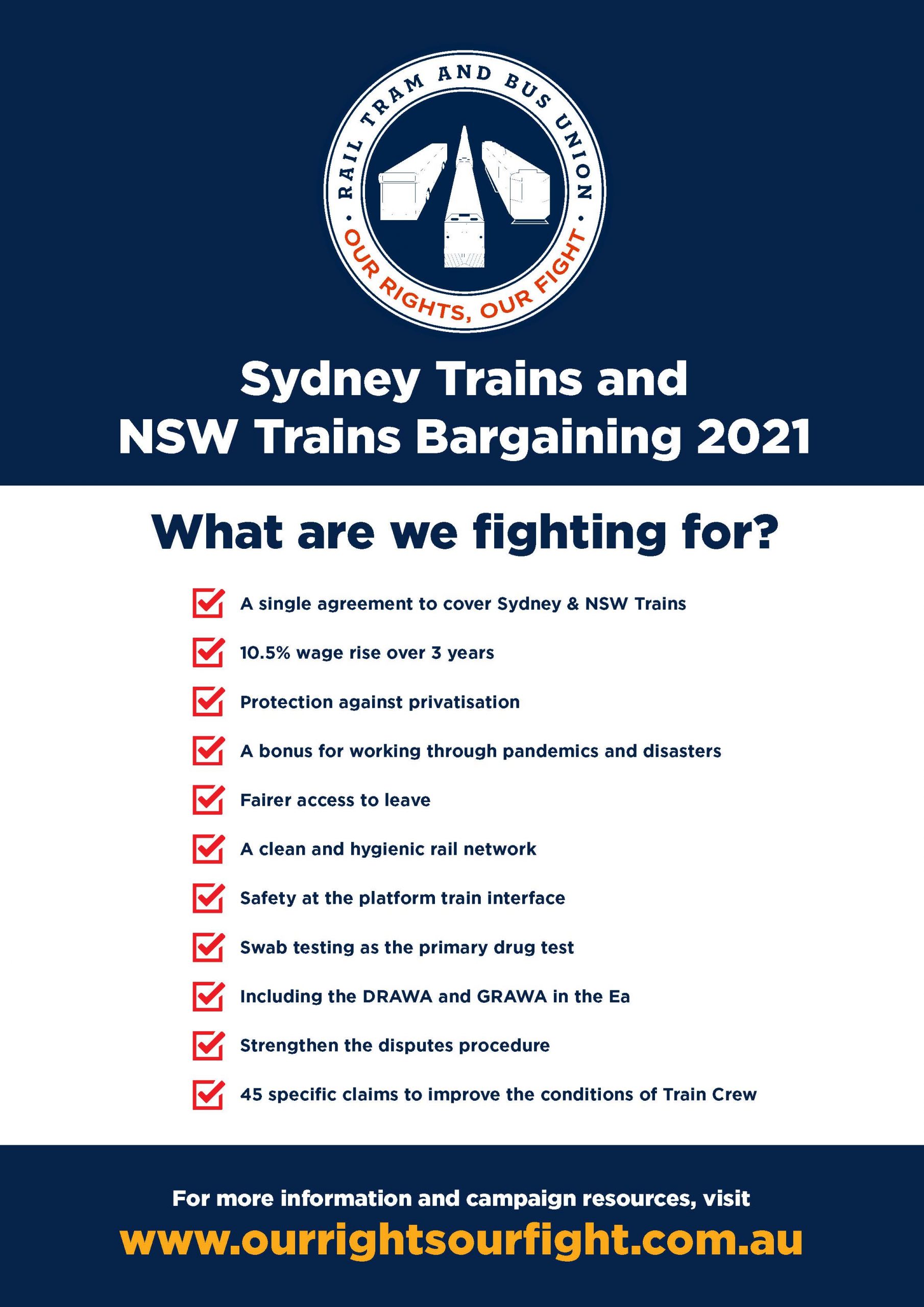 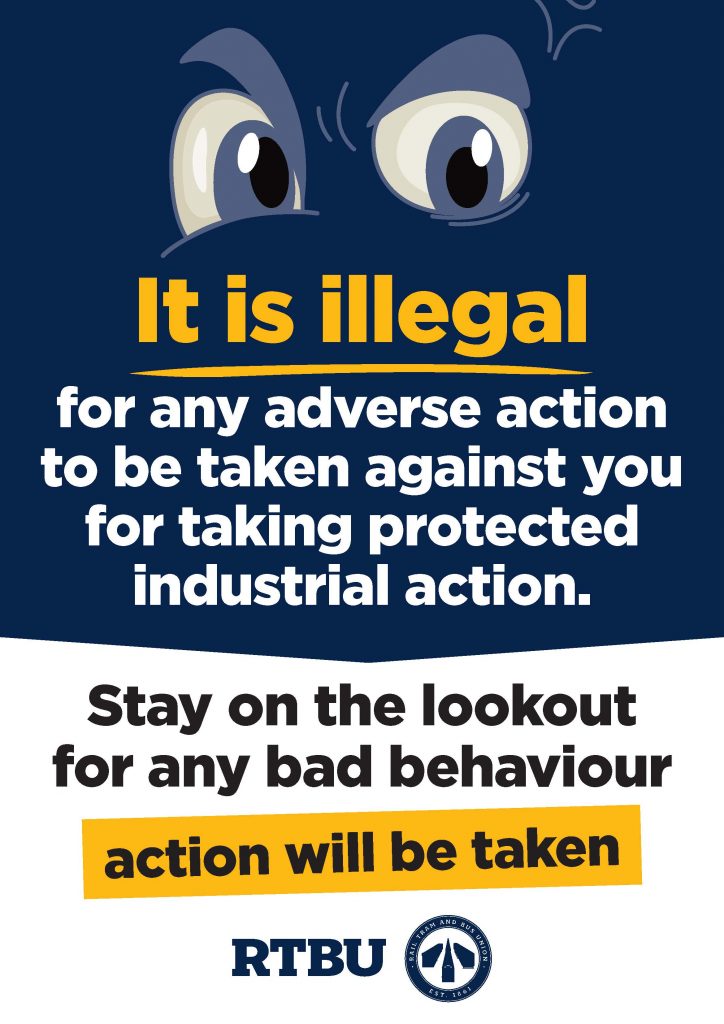